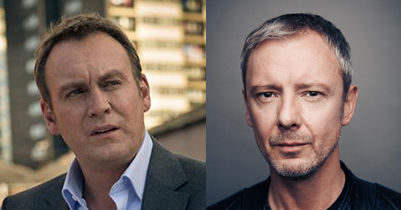 Philip Glenister and John Simm are reunited following the hugely popular TV series Life on Mars, Mad Dogs, Prey and State of Play for an exclusive In Conversation at the Orange Tree. With just half of the OT’s income coming from ticket sales, the Theatre needs to raise a further £450,000 a year. This special fundraiser will be an evening of great insights – intimate and up-close – with two of Britain’s most popular actors. Chaired by OT Artistic Director Paul Miller.

Philip Glenister is an Ambassador of the Orange Tree. His work on TV includes Living the Dream, Outcast, Inside No.9, Prey, The Level, Big School, The Hollow Crown, From Here To Here, Mad Dogs, Hidden, Treasure Island, Ashes to Ashes, Demons, Cranford, Clocking Off and Vanity Fair. Films include Bel Ami, You Will Meet a Tall Dark Stranger, Kingdom of Heaven, Calendar Girls, The Other Boleyn Girl and I.D. He last appeared on stage in the National Theatre hit This House by James Graham. He has also performed in Translations at the Abbey Theatre, Dublin, and Beautiful Thing at the Bush Theatre.

John Simm’s work on TV includes Strangers, Trauma, Collateral, Doctor Who, The Catch, Code of A Killer, Intruders, The Village, Exile, Moving On, Skellig, The Yellow House, Blue/Orange, Sex Traffic, Nero, The Canterbury Tales, Crime and Punishment, Never Never, Forgive and Forget, The Lakes, Between the Lines and Cracker. Films include Everyday, Human Traffic and Wonderland with director Michael Winterbottom, and 24 Hour Party People. On stage he’s worked with OT Artistic Director Paul Miller on Elling at the Bush and in the West End, Goldhawk Road at the Bush and the title role in Hamlet at Sheffield Crucible. He appeared in Pinter’s The Homecoming and The Hothouse at Trafalgar Studios and will feature in Celebration and Party Time at the Harold Pinter Theatre in December. Other plays include Three Days in the Country at the National Theatre and Speaking in Tongues in the West End.

A limited number of £20 under 30s tickets are available

Share Philip Glenister and John Simm In Conversation with friends