Richard Bean on David Storey and The March on Russia

What I look for in a playwright is soul. What is soul? I guess it’s my shorthand for the real thing, the authentic, someone who writes from experience, and whose character’s scars are their own scars. A writer who learned to write by living and not by attending a Play Writing PhD. David Storey had soul. 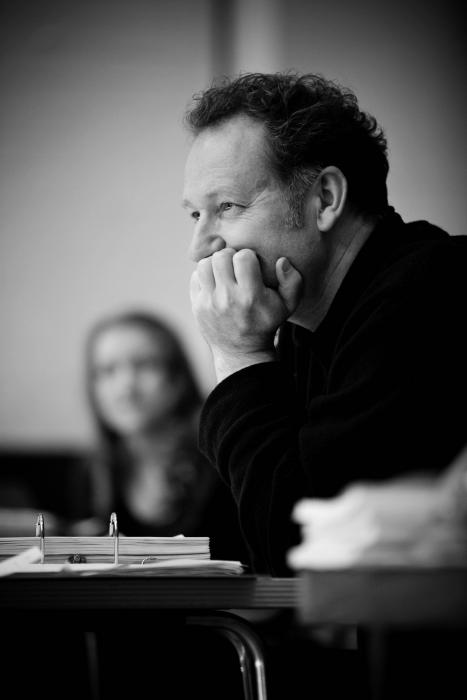 My first experience of David Storey’s writing was James Macdonald’s 1996 revival of The Changing Room his Royal Court play set in the locker room of a rugby league game. We, the audience, never see the game, the subject matter is the life and lives around the game. I had never had such a profound and lasting response to a play. I felt privileged being there, as if I was spying, looking in through a window unnoticed, and indeed ignored. I still struggle to come to terms with the knowledge that what I had observed wasn’t actually happening as it were in the real world, it was just a play.

Slow, truthful, authentic action. The playwright is painstakingly building characters dialogue brick by dialogue brick. Even the communal bath scene, after the match, where the 13 players strip naked, bathe and josh each other managed to be the very opposite of sensational, it was merely natural and accurate, it was what happens at the end of a rugby league match.

The structure of The Changing Room was simple — we saw the team before the game, during the game, and after the game. A beautiful three act structure. Not everyone liked it. Noël Coward said the 1971 production wasn’t worth 15 acorns entrance fee.

To say that David Storey’s writing was prone to autobiography suggests some kind of ailment, but his level of self-mining was possible partly because he had lived such a rich life. For every job he’d had he wrote the play: professional rugby league player — The Changing Room; tent erector — The Contractor; teacher — The Restoration of Arnold Middleton; artist — Life Class; farm worker — The Farm and so on.

In this play, The March on Russia, the autobiography continues. Set in a bungalow on the east coast an ex miner and his wife celebrate their diamond wedding anniversary with their grown up children, one of whom, a writer, bought the bungalow for them. David Storey was the son of a miner, and bought a bungalow for his parents near Scarborough from the proceeds of This Sporting Life.

The March on Russia is one of a trilogy of family plays the others being In Celebration and The Restoration of Arnold Middleton. All deal with what I call the wear and tear between generations. Gargantuan gifts of suffering and sacrifice from the parents’ generation pop out of the dialogue like toys flying out of a kid’s pass the parcel game, and just as often casually discarded by the middle aged children. The play’s themes are thus guilt, atonement, redemption, despair. David Storey himself struggled with the guilt of disappointing his miner father who had always wanted him to go to university. Storey chose art college, which at that time didn’t count, it was a flakey, vain, and selfish choice. Colin, the writer son in The March on Russia, is a guilt ridden, dark portrait of a man, rootless, not belonging and yet everywhere he goes he carries his father on his shoulder - what the psychologist calls the Critical Parent.

In his book about Brexit Britain, The Road to Somewhere, David Goodhart’s premise is that there are Somewhere people and there are Anywhere people. The Anywheres leave home, get educated, live and work away. He is describing all three of the Pasmore’s children. This conflict between the children and the parents, and the destruction of the past and traditional values is what makes Storey’s work still relevant. For any northerner who left home, went to university, came to London, and took up a flakey occupation (playwriting), and now visits their parents in a bungalow in Yorkshire where they have chosen, if it is a choice, to spend their last decade, this play is painfully well observed. My own father, the same age as Pasmore, said recently of my infrequent visits home “at this rate, you’ll see your mother fifteen times before she dies”.

This all sounds a little bleak, but fear not The March on Russia is perhaps one of the finest comic husband and wife sparring matches you’ll ever see. Rereading the play I found myself laughing out loud at the sheer talent the characters have in winding each other up, just like my own parents, who seem to have learned a music hall double act entirely made up of bickering, recriminations and mutual disingenuous incomprehension, by which I mean that they both play the game of making out that they don’t understand each other. This all in the service of what the writer son, Colin, calls “eristic” or discord deliberately created to fill a void. Now whose family is that describing?

The March on Russia is at the Orange Tree Theatre, in association with Up in Arms, from 7 Sep - 7 Oct 2017

Richard Bean was born in Hull in 1956. After school, he worked in a bread plant before leaving to study Psychology at Loughborough University. Richard has worked as a psychologist and stand-up comedian. In 2011 he became the first writer to win the Evening Standard Award for Best Play for two plays, The Heretic and One Man, Two Guvnors. His plays are published by Oberon Books.